I'm sure you'll know what I'm talking about when I explain it.
It's that feeling you get when you listen to a piece of music and you start to feel those tingly chills all over the back of your neck and down your spine. Sometimes it tingles up into your head and ears, your cheeks abuzz with prickling joy.
I don't experience it overly often, usually 1-2 times a month. My most recent experience was when I listened to this:

The title screen credits for one of my favourite games of all time, Legend of Mana (One which I often forget to put on my 'top games of ever' lists.)
I'd been hoping that Sony would see fit to release this fantastic game on the PS3 store as a PS1 classic, like it already has been on it's North American counterpart. But like most fantastic services, Australia is always either forgotten or not deemed a 'big enough market' to justify it's inclusion. So I went in search on Amazon.com to try and purchase an original copy of the game for PS1 (My family has 4 PS1's back at home so finding one would not be an issue) but, not much to my surprise considering how fantastic it is, the game is selling wrapped in original packaging for $100+. After much consideration I decided not to fork out for it, though I was very close to doing so I went to my old ROM library and booted the game up from there.
Ready to start my adventure I configured my emulator to take inputs from my gamepad (So I could play it with a controller) and started. I rewatched the title sequence, something I tend to do when I replay a game I haven't experienced in a long while, and was dropped on the title screen: 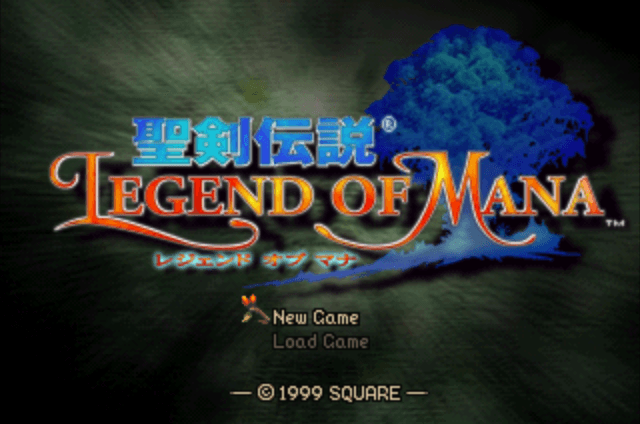 As I went to thumb the A button to start a new game up started the song and I was stopped dead in my tracks as it's simple melody infected my brain (Fuck yeah headphones). It was one of the most calming and comforting feelings I have ever experienced. I've had the tinglies from music before, but never like this, the feeling grew and covered my back, shot up through my neck and into my eyes and ears and nose. I even had time to close my eyes and put the controller down to more fully enjoy it. About a minute in I snapped out of it and remembered how much I'd loved the game as a kid, this game made my brain remember some of the best times I'd ever had when I was young, firing off good times and feelings like an exploding sparkler bomb.
If you haven't played it I'd encourage you to do so. Easily one of Squaresoft's finest accomplishments.

So with all that lead in we come to the point, ASMR vs Frission.
Now I wasn't sure, after experiencing this for much of my life, what or if this phenomenon was actually classified by science. Turns out, that it can be caused by one of two things:

ASMR: Autonomous sensory meridian response, AKA attention induced head orgasm, attention induced euphoria, and attention induced observant euphoria, (Second one is the best).
Reading through some info about it on the wiki and in the sub-Reddit dedicated to the feeling; ASMR Sub-Reddit it became increasingly apparent to me that from what little research has been done into this it seems like the feeling is solely developed internally by the persons own individual experiences.

Then there's Frisson, which has a lot less info but seems like it may also be relevant here: A Comparison of ASMR and Frisson
Described as more of a physical reaction than an internal one, Frisson is also likened to Cold Chills.

I wonder if you can feel them all at the same time? Or if experiencing one can cancel out the other?
Maybe they're like Peanut Butter and Jam, delicious on their own but also delicious together.

Irrelevant of what the feeling is actually classified as I love it. And it's one of the feelings that makes life worth living.


What makes you feel ASMR or Frisson? Let's share in the comments!

I need an interesting sign off line,
Reece
Posted by Reece at 10:43 PM

Reece
I am a man who has hair on his head and hair on his chin. I fight evil with an iron fist. Hoo-ahh.